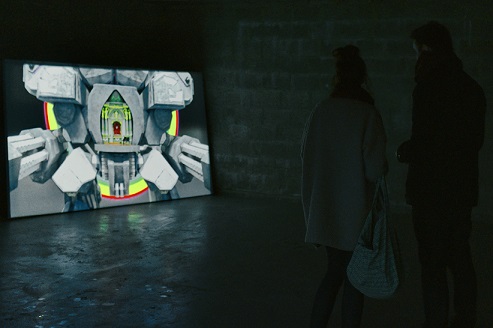 Jonathan Monaghan (b. 1986 New York, NY) works with high-end digital technology used by Hollywood, advertising and video games, to create otherworldly, ambiguous storylines that seduce only to unsettle. Their bizarre, disjointed narratives draw as much on the past and mythology, as on science fiction and contemporary culture.

His work has been presented in numerous venues such as the BFI Southbank in London, the International Rotterdam Film Festival, the Today Art Museum in Beijing, the Hirshhorn Museum in Washington DC, and the Anthology Film Archives in New York. He has lectured at Ravensbourne College in London, and Tsinghua University in Beijing, in addition to being a U.S. Speaker and Specialist selected by the U.S. Department of State. His 2011 3D printing MakerBot Artist Residency was featured on the Colbert Report, Bloomberg News, and NYC TV.