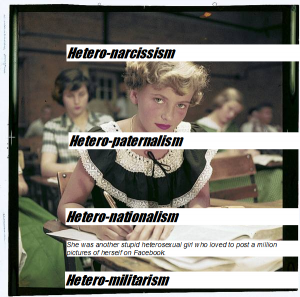 My  performance, art writing and research look at how terrorism can be interpreted and understood as a mass ritual performance and type of public art involving a radical de-territorialization of the accepted uses of public space. Using violence as “raw material” as Walter Benjamin suggests in Critique of Violence and problematizing the state-induced subjectivity between legitimate and illegitimate violence,  the terrorist embodies a mythical coagulation of “subjugated knowledges,” unconscious and defeated desires, the fulcrum point around which unarticulated opposition to the social order within the public gravitates.  Using Sylvia Frederici’s notion of the rebel body which must be destroyed, imprisoned and violently repressed to create the historical and ontological conditions for the establishment of capitalism, I am exploring what is a terrorist body, and how does it perform? A cyborg or hybrid body of flesh, metal, death, and a counter-narrative to the nation-state, how does the terror body express  Frantz Fanon’s idea of the radical poetics of violence? Most importantly, I am exploring how we situate the terror body in opposition to recuperation, an inexorable feature of late capitalism.  As land art which once spurned the  commodification of the gallery system has now degenerated into a high end “art tourism,”  minimalism which was once a refutation of the Western infatuation with pictorial representation is now caricaturized into a banal design aesthetic, site-specific installation which once opposed the idealist space of sculpture and  the monolithic monument has dissipated  into a benign marketing feature of the globalized art economy eager to manufacture consumable “difference” to offset the homogenization of place, institutional critique has been  instrumentalized by the institution to induce a solipsistic pantomime of an innocuous self-reflexivity, and Deleuze and Guattari’s critical theory of “smooth and striated space” is now used by  Israeli Defense  Forces military strategists to fight Palestinian rebels, it would appear that there is no “outside position” within cultural expression that cannot eventually be assimilated by the capitalist system. Therefore, is the terror body the last outpost of cultural expression that embodies a radical de-identification with the processes of bourgeois subjecthood that has not been recuperated into the New World Order?  Or as Damien Hirst asked,  was September 11th the best art intervention?